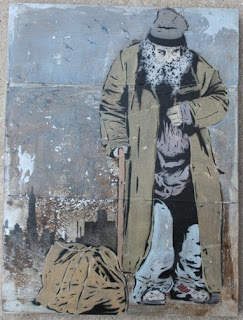 I am so pleased this worked out. Hopefully, Friday's column will become a more regular occurrence. Today, I am proud to present the first Friday ProFile interview.
Chris Stain’s work doesn’t just catch your eye; it returns your stare. On the side of a building, a homeless man shuffles along in baggy pants and a tired overcoat. A troop of disheveled firemen carry a wilted old man from an undisclosed scene. With his shabby clothes and distended belly, a little boy peers at passersby with a frown and a furrowed brow. A vagrant Santa stares bleakly from a brick wall. Stain’s stencils force pedestrians to look at people they’d otherwise ignore.
Growing up in the Highlandtown neighborhood of Baltimore , Stain’s first creative endeavors were inspired less by the streets than by KISS. He recalls, “My mother kept these drawings that I did of Gene Simmons…I think was five at the time.” Exposure to films like Beat Street and Style Wars and snagging a copy of Subway Art piqued his interest in the growing graffiti scene. “Tags and pieces started poppin’ up in my neighborhood in Baltimore ,” he remembers. “We were just tryin’ to emulate NYC.” 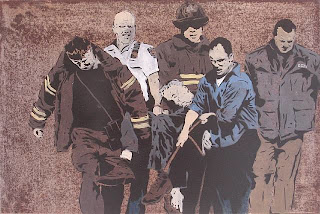 Dodging law enforcement and the occasional “local vigilante asshole,” Stain has been writing since 1984. In need of a name, Stain turned to hip hop for inspiration. He explains, “A New York City graffiti and rap artist named Ramellzee wrote a song called ‘Beat Bop.’ There’s a line in the song that talks about ‘stain on the train.’ None of the cats that I knew in Baltimore were writing STAIN, so I took it for my own.” Some of Stain’s friends have faced arrest and assault as a result of their writing. “Cops beat the shit out of a friend of mine,” he says. “Nearly broke his arms, ribs, and busted his head. We were just kids then.” Yet threats of jail time and violence did little to deter Stain’s zeal. Walls, freights, bridges, and buses proudly displayed his pieces. 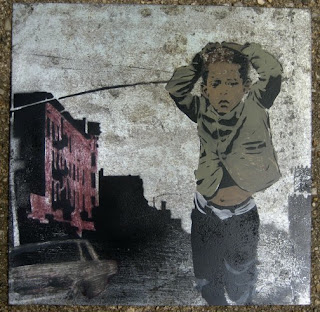 Over time, Stain’s style has evolved to incorporate other mediums. He explains, “I got into stenciling because I wanted to do more with the human figure. I wanted to tell my story in that way. In more recent work, I try to combine words and images together.” Through his work, Stain ultimately hopes to expose his audience to the struggle of those less fortunate.
When asked about the future of his work, Stain declares, “I plan to keep telling the story of common people and expressing their struggles to inspire some compassion in folks. It would be great to make a living off of my art, but that’s not always the case. I’m working on tightening up the work and adding more of the psychological events that take place in life. I have a show in LA in February and I’m trying to get this kitchen renovated so my kids don’t have to eat cereal with sheetrock dust in it.” 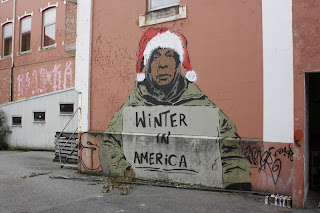 Today, Stain continues to draw inspiration from the events and people around him. In addition to close friends like Billy Mode, Josh Macphee, and Swoon, he also cites visual artists like Jose Parla, Ed Templeton, and hip hop artist Mos Def as influences. Defining street art as “self expression placed on the streets,” Stain believes that the future of the genre depends on who’s painting. “It could be more of a mixture of all the mediums and styles that you see now,” he replies. “It could also get back to basics; a can of paint and somethin’ to say.” Regardless of where street art goes, the best part of writing for Stain has been the ride. The greatest adventure, he says, is “just meeting some of the most sincere people in different parts of the world who are dedicated to the craft and are trying to make their voices heard. It’s made life interesting.”
Stain's solo exhibit, Up On The Roof, opens on February 6 at the Carmichael Gallery of Contemporary Art (1257 N. La Brea Lane, West Hollywood, CA). Call 323.969.0600 for more information.
All photos courtesy of www.chrisstain.com. Thank you!
Posted by MD at 7:39 AM

Illicit Exhibitions is not just a blog about street art. It's a community where creators, appreciators, and everyone in between can come together to share their work and thoughts about art in public spaces. Want to be interviewed? Have some photos or stories to share? Wrap it all up and send it to illicitexhibitions@gmail.com. Most importantly, spread the word and keep reading!

MD
Want to be interviewed? Have some photos and stories to share? Wrap it all up and send it to illicitexhibitions@gmail.com. Much love!