During the day, Luke Da Duke teaches school kids ages 12-18. However, this Dutch art teacher spends his nights filling the streets with stickers. When he was the same age as some of his students, he discovered graffiti. “I had two cousins who got up,” he says. “I tried it twice but got busted both times. I wanted to get myself out there and Netherlands sticker scene in the mid to late ‘90s was booming. There were guys like Influenza, Erosie, and ZIME getting up everywhere. I wanted to have a go, too.” 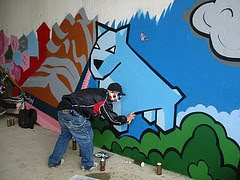 Stickering opened a slew of doors for Luke Da Duke.“I see new places, meet new people, and get inspired, all because of a little piece of sticky paper or vinyl,” he says. Over the past 10 years, he’s covered walls across London, Paris, Stockholm, San Francisco, Las Vegas, Amsterdam, Barcelona, Bern, and more. “The dog is still the same as ten years ago,” he explains. “I place the dog in different graphic surroundings. In the first couple of years, he was alone.” 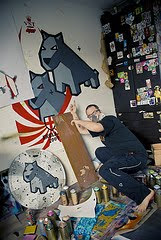 “Putting up stickers for the first time was something that gave me a kick,” he laughs. “It was something of mine, anonymously, out there for everyone to see. I still have that feeling when I’m in a new town or city and putting up stickers or posters.” While he insists he’s never been afraid while stickering, his habit has landed him in trouble. “A couple of times, I got busted for doing graffiti and stickering,” he remembers. “The first two times, I got away fairly easily and without any problems. On the third time, I got a fine for 30 euros…that was it.” 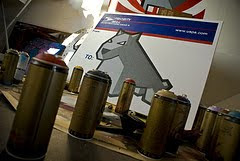 Flying solo is fun, but Luke Da Duke loves working with a crew. He’s a member of Grafik Warfare and VST Crew. “The good part about crews is that you hook up with the best people around,” he says. “It’s hard being international, though, because we’re so far apart. It isn’t like we meet on a regular basis.” 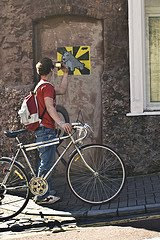 Don’t ask Luke Da Duke what he’s working on; he lives without a plan. “I will see where my work will go,” he adds. “I’m not doing it for the money or to get world fame or anything. I just want to have fun making the stuff that I enjoy making.” There’s no ulterior message to these slaps, either; it’s all about having a good time. “I'm not a moralist,” he insists, “I just hope I brighten people’s days just a little.” While he doesn’t know what’s in his own future, he believes a few dedicated souls will keep street art alive. “It will probably only get bigger and bigger size-wise: bigger stencils, bigger paste-ups,” he predicts. “At the end, most of the people out there right now will be out. Only a couple of hard heads will keep it alive.” 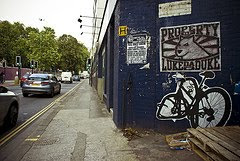 Thanks, Luke! For more photos, check his Flickr. I'm looking forward to a weekend at home since the past two weeks have been absolutely bonkers. Here's to not working and sitting on my couch!
Posted by MD at 7:00 AM

Illicit Exhibitions is not just a blog about street art. It's a community where creators, appreciators, and everyone in between can come together to share their work and thoughts about art in public spaces. Want to be interviewed? Have some photos or stories to share? Wrap it all up and send it to illicitexhibitions@gmail.com. Most importantly, spread the word and keep reading!

MD
Want to be interviewed? Have some photos and stories to share? Wrap it all up and send it to illicitexhibitions@gmail.com. Much love!